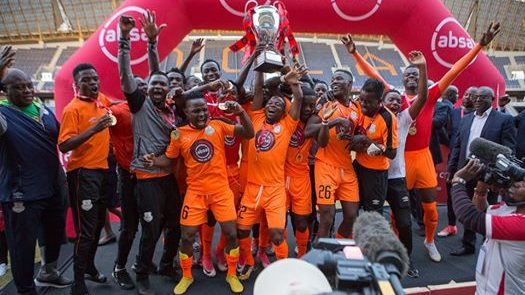 2019 Zesco vs Green Eagles Combined 11 will brings a thrill to the football table. Zesco United will be searching for a double this weekend as they take on Green Eagles in the league playoffs. The Zambia super league 2019 final match and league champions decider will be held on Saturday 29th June at Woodlands Stadium Lusaka.

It is a match pregnant with fluidity and we take a look at the most eye-catching players to watch from both sides in this combined eleven.

I have written so much about the steadfast gloves of Sebastian and his exploits at the 2019 COSAFA where he won the golden glove is enough testimony of what he can offer. The Eagles shot-stopper will be in between the sticks and coming against a Zesco that will have no Kambole, he is highly likely to keep a clean sheet.

He has spent most of the season in the treatment room but seeing him back on that Zesco right back position is always an ignition of goosebumps.

Mwila Phiri has been growing in leaps and bounds since he joined Zesco United. He plays with a working brain and always ready to walk on broken bottles to win possession. Lanky, brave and direct, he is one for the future.

Sunzu has been one of the most unsung heroes of the 2019 league. His man to man marking while alive to the pockets of spaces around him has been sublime. He has been such a rock in the Eagles rear guard and he will be a player to watch in this final.

The former Kabwe Warriors man seems to have found home in Ndola. He has been in a scintillating form and negotiating past the concrete wall he creates alongside Kalonda has been a nightmare to many front lines in the league.

The veteran has bee. Looking his battle with time but remains one of the best anchormen around. His vision and rhobust ba distribution is top nortch.

NSAUTU has got some thumptuous legs and his drive going forward has been instrumental in the resurgence of Green Eagles. He has wheels at his feet and causes problems for any defender on his way.
He easily finds those little keys holes of space and invents his magic from such nothing and that’s what has always distinguished the little maestro.

The Green Eagles captain will certainly be top on the list of the players to watch at woodlands this Saturday. He is fearless and strong on the ball while his imposing presence in midfield has the ability to change the match.

With Kenya struggling to find footing upfront in Egypt, they might be regretting leaving the King behind. He is unarguably one of the best-centered forwards in Africa sand and his numbers are all to prove such a robust claim with 12 goals already to his name this season the King might just extend his lead to the copper chase.

That’s a name that needs no introduction. He is physically intimidating and his appetite for goals and mental strength on and off the ball has been sublime all season long.

Ching’andu is simply class and a dictionary definition of modern football. He doesn’t work for the ball, he makes the ball to work for him. He releases the ball with precision and makes it work for him through using the empty spaces and once he steps on his peddle, he is a flash of lightning