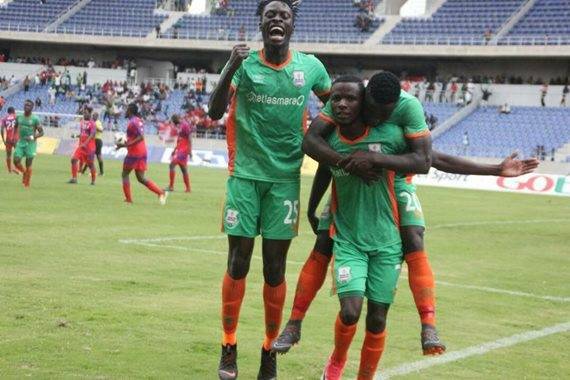 An early lead from Rahim Osumanu could not thwart the later run around by Adams Zikuru, Jesse Were and Lazarous Kombole as they tore down 10 man Buildcon by 3-1.

The Ndola derby saw big spenders Buildcon humiliated at home, during week 3 of the Zambia super league, by the 2017 league champions. The match was played on 1 st April at Levy Mwanawasa Stadium.

Captain Chishamba Lungu marshaling the mid pushed Buildcon for an opener with a set-piece corner taken by John Matakwa and headed in by Rahim Osumanu. 9 minutes into the second half Buildcon could not progress further than the Lazarous Kambole and Dauti Musekwa countering from the flanks while Misheck Chaila held the mid.

It was from Dauti Musekwa to Lameck Banda cross finding Adams Zikuru who canceled out the Buildcon lead before Jesse Were added on further. Both Adam and Jesse came out of the bench.  Ten minutes into the game after substituting Winston Kalengo Jesse Were 68th brilliant move from Kambole back pass created enough space past one- Christopher Munthali, two- Ben Adama Bah, three- Tatenda Mkuruva and Zesco took the lead.

15 minutes to full-time Devon Chafa dangerous foul booked into Red Card reducing Buildcon to 10 man. The Zimbabwean was earlier cautioned but the tackle against Lameck Banda forced Janny Sikazwe to produce the second yellow. Kambole recorded his fourth goal for the 2018 season against Buildcon from the spot. Jesse Were was brought down within the area and the referee pointed to the spot just 5 minutes before full time.

Next Zesco United plays National Assembly at Levy Mwanawasa on Wednesday 4th April while Buildcon will be away to North Western Province facing Lumwana Radiants. Build now sit second to the bottom having lost both games played.

Earlier kick-off at the same venue saw a late score from Damiano Kola that sealed Zeddy Saileti men into a second loss of the season. Forest Rangers collected 3 needed points to move on the table after having lost to Nkana. Rangers failed to fulfill the brought forward fixture 20 and consequently, Nkana was awarded 3 points 3 goals.

One thought on “Adam Zikuru and Jesse Were tore down Buildcon”