Richard Kazala together with Blackwell Siwale have been suspended for ‘Gross Misconduct’ contrary to the FAZ constitution.

In keeping with Article 28 (ii) of the FAZ Constitution FAZ President Andrew Kamanga has a verse to suspend his Vice President Richard Kazala and Committee Member Blackwell Siwale on account of their GROSS MISCONDUCT.

In a two paged suspension letter Mr Kamanga has cited that Richard Kazala conducted some FAZ transaction without express authority. Misconduct and failure to follow the President’s directives especially on tickets sales.

“Receiving money on behalf of FAZ despite my guidance that this function remain that of the General Secretary and Finance Manager.”

Kazala is alleged to have failed in his duties with failure to account for K150,000.00 coming from ticket sales.  Also failure to exercise due care resulting in a FAZ potential loss of 1.9m kwacha. 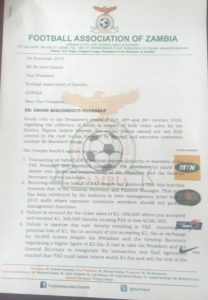 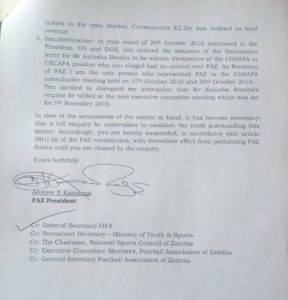