Skip to content
You are here
Home > Politics and Football in Zambia > BOWMAN LUSAMBO BLASTS FOOTBALL HOUSE, CALL FOR RESIGNATION OF KAMANGA 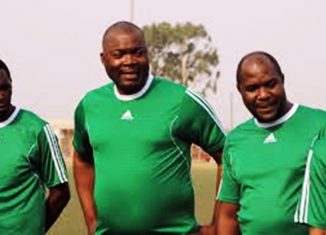 In a letter of about 650 words Honorable Minister Bowman Lusambo as a football fan blasts Football House and the Zambia FA for its recent shambolic – chaotic, disorganized and mismanaged, quality of football show. He also called for Andrew Kamanga as the leader to step down because he has failed.

Among many issues Honorable Lusambo is displeased at the lack of solid structures for age group football despite the current patron President Lungu unprecedented support. Also he listed the poor operational issues by the FA as reports of Bailiffs visiting the Football House keeps on coming.

The Minister alluded to unpaid salaries for the former Chipolopolo boss Wedson Nyirenda coupled with failures to comply with FIFA audit standards.

And summing it up the Minister is agonised at the news of the Zambia senior football team missing out on the Africa’s most prestigious tournament AFCON for two consecutive time now. The Women’s national team also slimmed out on the chances to qualify to world cup after been bashed by Nigeria women side yesterday at the ongoing Ghana 2018 Women Africa Cup.

Here is the full letter

FOOTBALL HOUSE IS IN A MESS

AS a former football player and ardent football fan, I wish to join millions of Zambians in expressing disappointment at the dwindling fortunes of our beloved game in this country. I am in utter shock to come to terms with the fact that the Senior National Football Team is yet again missing out on a place at AFCON, consecutively.

The age group teams such as Under 23, Under 20 and Under 17 do not have any solid structures to talk about. The team has even flopped at COSAFA and CHAN. The female sides including the one participating at the ongoing Women AFCON in Ghana just registered a miserable loss to Nigeria, complicating its chances of qualifying to the World Cup.

Reports of bailiffs at Football House paralysing operations are a regular occurrence.

Allegations that immediate past Chipolopolo Coach Wedson Nyirenda had gone unpaid for seven months have not been challenged by FAZ. The Chipolopolo has been failing to play quality friendly matches even during sanctioned FIFA days. The FIFA audit found glaring irregularities resulting in Football House losing a good share of its annual allocation from Zurich. The much talked about KoPa kit has flopped, the team now appears like a Sunday afternoon social football team.

It is now becoming agonizingly painful being a Chipolopolo fan. Football is about results and the results under the current leadership have been poor.

As the catalogue of failures keep piling up, it becomes non-negotiable that the current FAZ Executive led by President Andrew Kamanga should reassess its mandate, resign to save our beautiful game from the ugly misfortunes that have besieged it. President Kamanga, as leader of this sinking Ship should take the blame, show leadership and step down. It is clear that he has failed to plan, he has failed to exhibit leadership, he has failed to inspire and he has lamentably failed to unite the football family. His tenure has been marred by resignations of key officials.

Anyone who has followed football in Zambia will agree that the current Executive has spent more time fighting the previous administration and passing the buck. It’s now three years since President Kamanga took over Football House and surely it is becoming boring to blame the Kalusha Bwalya Executive even for today’s misfortunes.

The current leadership has unsuccessfully attempted to rubbish the achievements of the past Executive. Wisdom would have meant that they could have used the immense football knowledge and global connections that Kalusha Bwalya possess in an advisory role. Moreover, as a follower of football in this country, I do not believe that Kalusha would turn his back on a country that he loves dearly if called upon to assist.

Regrettably, the current Executive has spent so much time writing letters to regional and international football organizations to discredit a man the country has honoured as a Hero.

This whole debacle is happening at the time when the FAZ Patron, His Excellency President Edgar Chagwa Lungu has exhibited unprecedented support for football development in this country. I am aware that the Patron is equally displeased with the state of affairs of our game because he has personally gone out of his way to support the team.

With this level of unprecedented support from the Head of State, it is inconceivable that an Executive can still want to remain in office when it has failed to organize the game. As a leader myself, I believe everything stands and falls on leadership.

It has therefore become untenable for President Kamanga and his team to continue leading the affairs of the beautiful game.