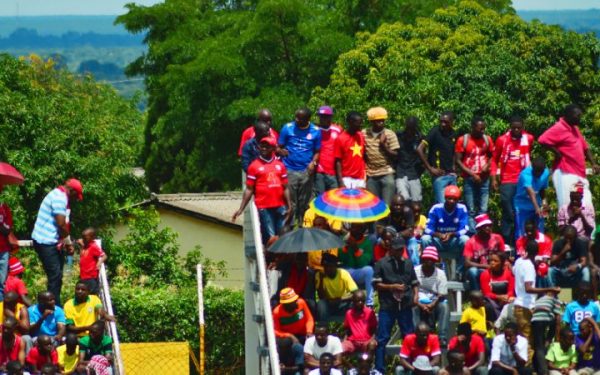 For reasons untold or what others conclude “the love of money or fear of unknowns-confusion” the 2015 SAMUEL ZOOM NDHLOVU CHARITY SHIELD REVISED CHARGES FOR SECOND SEMI-FINAL details are;

Power Dynamos advanced to the finals from the early and only score in the match by Jimmy Ndhlovu in the 10th minute. Power enjoyed a possession in the early satges that resulted from the Derrick Mwansa cross to be finished accurately by Jimmy.

Both teams showed maturity despite Zanaco been inactive for most period of the season-closure. Yelow cards freely flowed to Larry Bwalya (Dynamos), Augustine Mulenga, Aubrey Funga and a Red to Lee Ngonga (Zanaco)

Power Dynamos had near  misses and chances from Mudenda and Alex that could have made a higher scoreline. Mudenda played well seemingly reformed and disciplined.

As Ngonga shocked and in justified appeal

Game was abandoned at half time due to heavy rainfall. The Zesco side was in inspirational with a kick toward priority and superior in tact.  Mature and well formed.

Chaila inspiring his team for the kick off

The inspiration Chaila took it personal to more controlled after been complacent at midfield, a scenario Nkana failed to advance with as they urged more into lapses and aimless traverses

While Kanda tried to assume Sate Sate role with a few efforts wasted into little results leaving a few wondering “will Kanda really assume this role?”

Tactly Zega has always shown better than Kalampa and so expected  to advance prowess over timid Nkana.

Shadreck Musonda assimilates the first fruits of the downpour

Fans caught up in the heavy downpour

Fans getting a piece of it , while waiting for the Officials to decide the fate of the game

Open wing section before the rains

Swimming with the tide – Nkana can turn tables