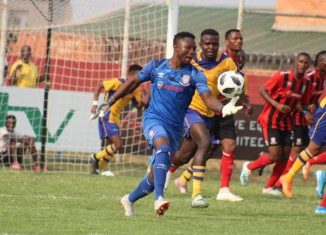 Sensational Zanaco hog down Kabwe Youth Soccer Academy quietly on Wednesday 25th in midweek fixture of ZSL matchday 4. Thanks to Charles Zulu who was twice on target teaching the toddlers the league’s ruthlessness.

Early on in the 12th minute, Zulu found space and wasted no time for a clear chance on target. It took an additional 8 minutes before another chance but the long-range attempt proved futile as Chungu’s shot went wide.

KYSA forced into the game plan when Maunga limped out and he’s replaced by Lewis Nkandu.

Maziwisa broke from the right hesitant but the flag stayed down, found his way into the area, tries to shoot, but for Lombard to block.

Things went quiet for a time but a chance for Zanaco in the 39th when Zulu hit the side netting after an interchange of passing by Rusike.

With the half time substitution on Zanaco Kiala on for Rusike, the game twirled to a second goal. From a Manziba run on the side, Zulu found himself in a position to hog down the academy with a double.

Adding 2 minutes into extra time KYSA Mbewe’s goal was ruled out for offside and still, the effort proved less as Zanaco banked in 3 points.

This was a booster needed for Sensational as 3 days earlier result from MTN FAZ week 3 saw the bankers kneel down before the law enforcers Nkwazi.

City Youth Club touched down in Lusaka ahead of their CAF Confederation Cup first round, second leg match against Zanaco at National Heroes Stadium.