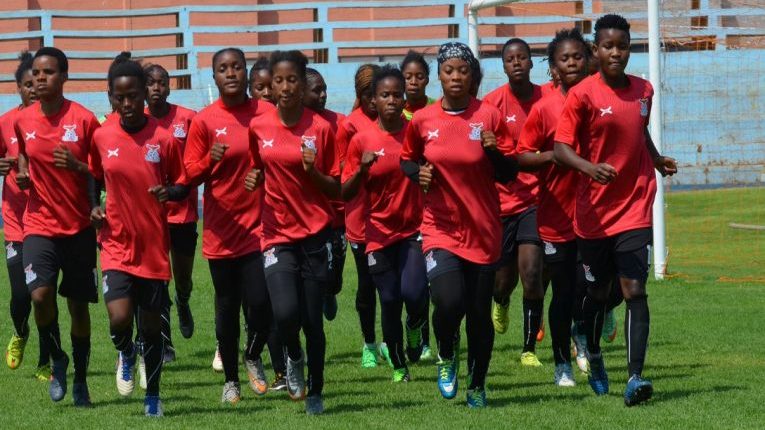 The copper Queens have never been to the Olympics and their quest for a maiden appearance will go under the skin when they host Zimbabwe this afternoon.

The dice is already cast for Zambia vs Zimbabwe women football for Wednesday at 15 pm at Nkoloma stadium for the TOKYO 2020 Olympic Qualifier.

After maintaining silver at the 2019 COSAFA senior Challenge, the copper queens will be back to work this afternoon but with some fragments of improvement as the girls plying their trade in Europe will beef up the squad.

Facing Zimbabwe looks easy for the girls on paper but Zimbabwe is a side capable of hitting Zambia to extremes of no recovery if given room to do so. They displayed quality attacking football at the COSAFA senior Challenge and Zambia will need to be at optimum best to outwit the lady warriors.

The battle for Supremacy in this fixture will huddle around the midfield and the copper queens will heavily rely on Mwakapila for creativity. She will engineer the pressure waves from the heart of the field and she will have to do it at an explosive proportion and momentum.

Zambia will need to score as much as possible playing from home and the attack mode has been given some extra grams after the Kazakhstan girls jetted in.

The Zambian attack mode in the absence of Barbra Banda will be orchestrated by the industrious Racheal KUNDANANJI, the glitter-free Misozi Zulu who is likely to captain the team and the all firing Racheal Nachula.

More On Shepolopolo; The Best Of the Copper Queens

The three are a deadly force whose tentacles are capable of suffocating and dashing Zimbabwe’s hopes of advancing even before the second leg is played.

While Zambia will step into this fixture with robust attacking power, it is the defense that pauses some slides of worry. The Zambian defence exposed some cracks in the final against South Africa and those cracks will need to be mended or Zimbabwe will have an away goal.

The second leg of the match will be played on Sunday in Bulawayo.