Skip to content
You are here
Home > Zambian Football Players > Dobo Engine: Why Chamanga has been burning bushes 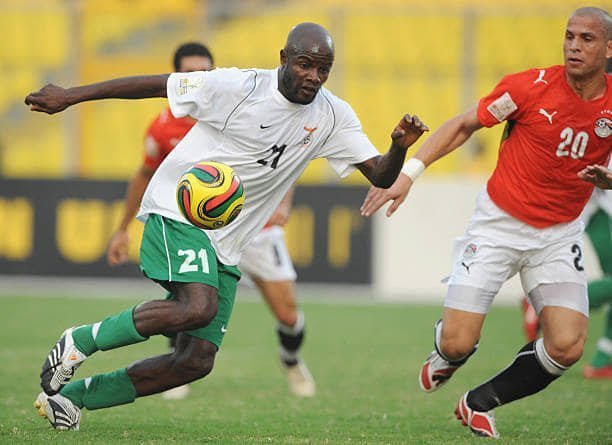 The legendary James Chamanga – DOBO engine – has been in razor-sharp form since he joined Red Arrows from China and he looks unstoppable.

He is definitely an experienced figure in the Arrows attack but there is just more than experience in what Chamanga keeps offering on the pitch. He carries the entire team on his shoulders and here is why he has been so far unstoppable.

He runs with such deft and touches but his most lethal weapon is the ability to keep calm and pick a spot before he unleashes the killer sting.

It’s a genre of striking prowess that has not been around in the league for a while now and many young forwards have a lot to learn from him.

Romelu Lukaku has risen to stardom in the recent past due to his crushing choking hold: Holding the defender, then making a snap turn to face him and power forward with Buffalo aggression. Modern football demands the number five to always stand alone without any striker to mark in what is called the sweeping role.

While in the sweeping role, Defenders will always look solid and concrete till they find a striker who sticks on them like a land mine beneath afoot.

Chamanga has been such a problem because he has not been playing spaces, he keeps lingering around and bends the last men forcing the defenders to make mistakes.

He has been a marvel to watch in that role as he keeps generating the power of a 20-year-old in his quest to keep his markers at bay, he keeps those damaging moves all day long till his markers allow him space then his poise and control do the damage. Incredible!

I call him DOBO Engine for a reason obvious: His tireless distribution of energy, power and penetration impetus across the final third.

He is older than most strikers in the league if not the oldest but Chamanga is a beast in the field and burns more calories than any other.

He keeps making those strong runs left right and center. His flexibility in the air and generation of extra energy in his right foot has been jaw-dropping. Like a springboard, he compressed and let himself loose in the box before he pounced on a loose ball with his head in the game against Power Dynamos.

That was unbelievable from a man of his age. He is a DOBO engine.

I am not sure if he can unleash the same level of competence at international level he has kindled a fire that he can’t put out: Integrity and patriotism now demands him to join the CHAN squad.