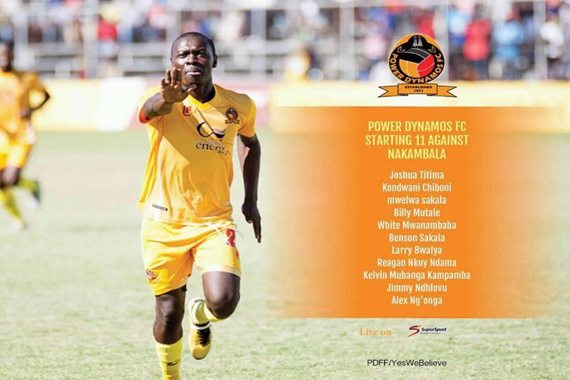 Green Buffaloes and Power Dynamos moved neck to neck on Saturday 7th April during the week five of the Zambia super league. Both teams continue to lead the table having 13 points from the 5 games played winning 4 and drawing 1 respectively.

But into the weekend Buffaloes switched the top spot with Kelvin Kaindu’s Dynamos having been superior in the Goal Difference. The Army side Buffaloes are supreme with 6 leaving behind the Ndeke team ABA Yellow stating with 5. This was after beating Nchanga Rangers 1-0.

Meanwhile Coach Patrick Phiri of Nakambala Leopards showed concern at the quality of officiating during the match 5 at Arthur Davies;

Am very unhappy, quiet disappointed with the result. We put up a decent display and we played well. I think this is a match that could have gone our way. We created very good chances only goal keeper to beat but we missed those chance. And when you look at the goal power scored it was just a gifted goal. Of course with a fair referee i think we could have better today

Benson Sakala scored for the host having been charged with the ball from Kelvin Mubanga Kampamba minutes before the half time.

Meanwhile Napsa Stars at Forest Rangers scoreboard registered trouble for Coach Linos Makwaza. Napsa Stars are yet to win a match since the 2018 super league season commencement. And both Nchanga Rangers and Green Eagles recorded losses at home for their week 5 fixtures.

Green Buffaloes threw in a 2-0 victory that pushed them to the summit of the table while Kabwe Warriors recorded the similar scoreline. It was Nkonko’s brace, first goal in the 27th and second at 37th, that charged the Warriors to victory.

And envoys in the CAF Confederation Cup Zanaco lost at National Heroes Stadium in Lusaka to the visitors Raja Casamblanca by 2-0.