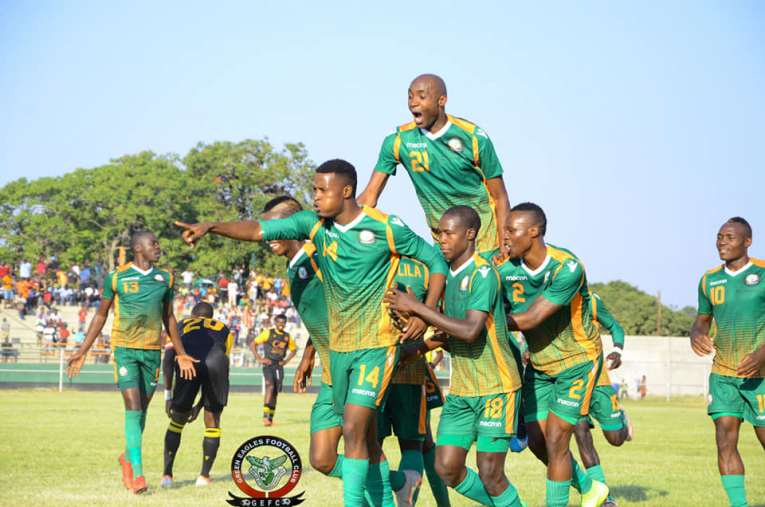 Green Eagles made a strong statement about their magnitude and place in the Zambia Super league when they crushed Power Dynamos in Choma this afternoon.

Power Dynamos had nowhere to hide as the bloody thirsty Green Eagles pounded them to mince meat in a 3-0 rout. The match began like a cagy affair before Kennedy Musonda broke the dead-lock in the 37th minute. Musonda bagged his brace a few minutes later before Shadreck Mulukwe put ice on the came fifteen minutes before time in a resounding 3-0 bashing.

In WUSAKILE , Nkana survived a BOMB scare as they held the Mabanga boys in a one-all stales mate. Bells of trouble jingled at CHILATA when Lazarous Phiri scored in the 60th minute to put Kansanshi Dynamos ahead but Idriss Mbombo leveled for Nkana ten minutes later to save more Nkana FANS from being handed life bans.

Nkana has now gone three matches without a win and nerves keep cooking on gas at CHILATA as Chambeshi seems to grasp for fresh air.

Arrows too good for Buffaloes

It was another man of the match display for fantastic James CHAMANGA as Red Arrows beat Green Buffaloes 2-0 in Lusaka. Evans Musonda put Red Arrows ahead in the 27th minute before James Chamanga scored his 4th of the season six minutes before the half time break.

James CHAMANGA who has been in devastating form for Red Arrows turned down a National team summon last month stating that he needed to give chance to young players.

KYSA stooping down at speed of lightning

Kabwe Youths Soccer Academy (KYSA) has kept STOOPING down to the Bottom of the table at a SPEED of LIGHTNING. KYSA had an opportunity to put their house in order this afternoon as they welcomed fellow weeping boys Nakambala Leopards but things keep falling apart in Kabwe and the center just can’t hold.

Nakambala Leopards sneaked out of Kabwe with a 1-0 win as E. Maguri powered in the only goals of the match.

It was a BORING 90 minutes in NDOLA as Buildcon held ZANACO in a Barren draw. ZANACO could not record a shot on target in the whole ninety minutes as the match produced nothing to talk about.