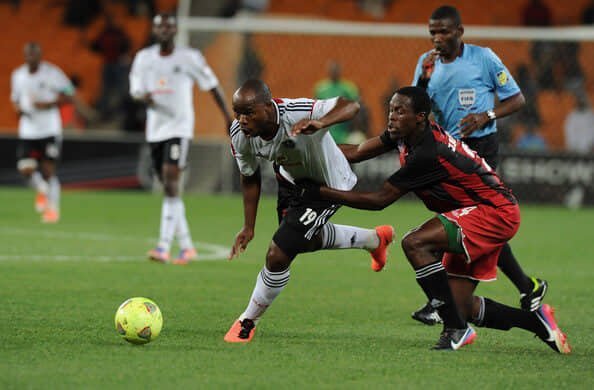 Green Eagles overcame Orlando Pirates 2-1 over two legs to progress to the next round toiling into a cornerstone for superb progress of Zambian football.

They maintained a perfect circumscription of a masterpiece of a game plan. Moving in a defined parallel file each time the were defending and spreading wide without breaking the whirlwind of togetherness in the middle each time they were under attack.

Green Eagles overcame Orlando Pirates 2-1 over two legs to progress to the next round. While in the same vein CAF Champions League 2019-20 preliminary Zesco United defeated Green Mamba of Eswatini 3-0 on aggregate.

On the other hand newcomers to the Caf confederation cup Buildcon, however, bowed out after suffering a 2-1 aggregate loss to Young Buffaloes.

This Green Eagles team gel together so well, they confide and find strength in each other because they all have a similar story to tell and they are going places. They are all coming from a background of being looked downtrodden and when they were buried, they turned into seeds that germinated in Orlando yesternight.

The year 2003 we were teenagers of 12 and 13 years old in Kabwe and playing for young Kabwe Warriors. A day before our under 15 coach died, we went to see him in Kabwe general hospital: As we were to leave, coach Abby held the hand of Gift Wamundila and said.

The following morning he died. Gift Wamundila then had a rough runway and dusty takeoff. He was not given game time at Green Buffaloes his parent club. Then he went to Nakambala on loan where times were still rough and hard playing as a right back.

He was again loaned to Eagles where he has found a resting place. He is a hard puncher, born fighter and leader. His rise to that level of commanding his line with ferocious discipline under scorching intensity has been manufactured in a furnace of Tears, rejection, and self-determination.

I first met him in Mongu in 2008, they called him Jubra and this 16-year-old had so much quality in defence; he was a concrete pillar. KWILIKO went on to be signed by ZANACO only to be turned into a training partner for close to 7 years. He pleaded to leave the other season but they lied to him that he will have game time as Ziyo Tembo was about to leave.

Ziyo Tembo left but Andrew KWILIKO still sat on the bench for the whole season as Numba brought Banda. He left ZANACO for the first time this transfer window. He has been at ZANACO since 2010. The quality he displayed yesternight asks Numba Mumamba so many questions on why and how he was so determined to kill such talent without even blinking.

He is a boy with nothing to write home about his profile. He came into this match with no flamboyant pages of the trace. The only accreditation he carries is his poise, composure and full tank that kept burning gas like an Apollo 11. He was a lightning arrestor

The confidence to shoot from such a difficult angle connecting such a fractious ball was insane. He attempted a little incline to face the ball in the famous Muhammed Alli North pole stance. Then he jerked his mass a little low to sharpen his center of gravity before he dropped a shoulder while focussing on the ball and struck with panache and acute precision. Sheer quality: The goal was bewitching and Eagles were flying far beyond the reach of the Pirates.

He was playing for National Assembly last season had a telling season and was expected to be lured by top most clubs. He found himself at Green Eagles and the future for the little diesel engine is Bright.

He was slapped with a lengthy ban in 2012 while playing for Zesco Shockers. The Football Association banned him from playing after Zesco Shockers after shockers used him against the City of Lusaka charging him on grounds that he was still on suspension. Hosea rose from the dust ruins but his journey to this far has been a rough ride, he went to Lumwana and was part of the Lumwana side that won promotion into the super league before he played for Lusaka Dynamos last season. He was a workhorse in that troubled sea of bloodthirsty sea Robbers.

Rejected at ZANACO, Samson CHILUPE has been around and on the move in search of his footing. It was not the first time CHILUPE was playing Orlando pirates in a game of such magnitude . He was part of the ZANACO side that was eliminated by Pirates from the Champions league in 2013. Collins Mbesuma was at Pirates and six years after shedding those tears of bitterness, CHILUPE was back in Orlando to revenge. What a match he had yesternight.

The story of how cross-grained TAPSON Kaseba’s road in the past three months is everywhere in the air. It has been a walk on pins and needles from being given English lectures by even people who have a module of G.C.E papers they are calling certificates to calls for him to be dropped from the CHAN squad after failing a shot on target in Botswana. Kaseba just keeps going.