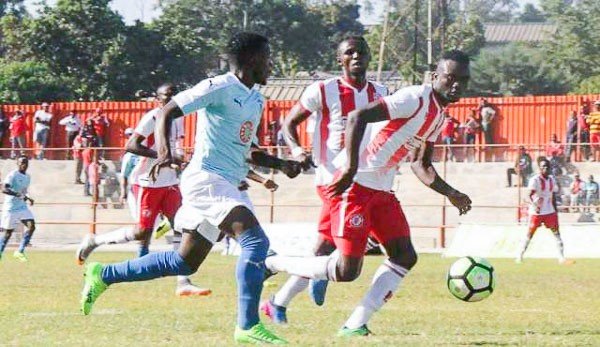 The estimated reading time for this post is 86 seconds


Kabwe Warriors frustrate Nkana when they came from behind to conclude the fixture at a draw.

Nkana FC were forced to a 2-all draw by visiting Kabwe Warriors when they clashed at Nkana Stadium on Saturday in the MTN FAZ Super League Week Ten fixture.

Kalampa took the lead after 25 minutes of play when Simon Bwalya’s header was tapped in from a close range by Austin Muwowo.

Jacob Phiri could have levelled the scores in 30th minute but his effort went wide.

Jacob Ngulube doubled the advantage for the home side when he shot from long range to beat Warriors goalkeeper Lawrence Mulenga.

Silon Jere pulled one back in 57th minute before Lameck Kafwaya scored the equaliser five minutes after hour mark.

Kalampa were missing the services of striker Ronald Kampamba, Given Sinyangwe and goalkeeper Kelvin Malunga who are on national duty.

Nkana travel to Lusaka on June 10 to face Lusaka Dynamos before hosting Power Dynamos a Week after.