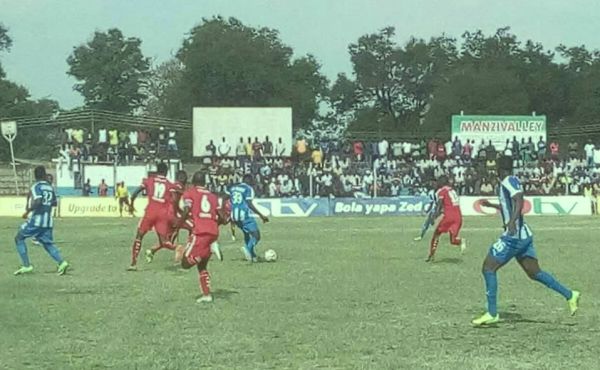 Kabwe Warriors showed some stellar performance despite being held by visiting Nkana FC to a 0-0 draw at Godfrey Chitalu Stadium in the Week 29 match of the FAZ Super League. It was a showdown game in which Nkana were convincingly outplayed by Warriors.

The Kabwe side could have gone at half-time with a comfortable 2-0 after missing a penalty and a goal disallowed by the referee. Warriors were at full strength in both halves and kept Nkana chasing shadows throughout the game.

Despite the hard fought draw, Kalampa still maintains the 7 year unbeaten record against warriors. Kalampa drop to 4th position on 49 points while Warriors remain stuck on 15th position with 28 points.

Meanwhile the fixture at Lumwana Grounds in Solwezi produced a frightening result for the Army side. Zeddy Saileti led men beat the Mighty Buffaloes to an astounding 3-1. The result meant the Buffaloes still remain at the top with 53 points and only Zanaco win tomorrow will bring the Bankers at par.

Zanaco vs City of Lusaka