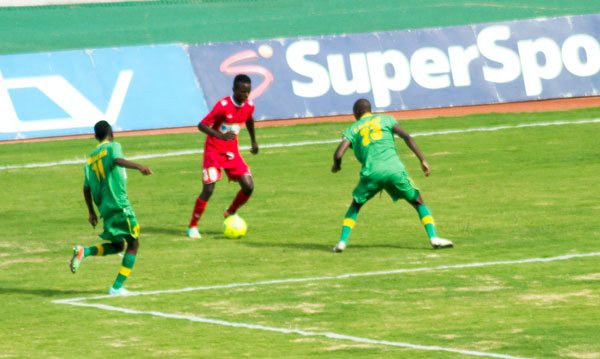 Ronald ‘Sate Sate’ Kampamba and Idris Ilunga Mbombo netted in either half to inspire Nkana to a 2-1 victory. Kalampa chopped of Forest Rangers  at their own backyard in Ndola on Wednesday during midweek super league commitment.

And Zesco United have maintained leadership of the MTN-FAZ Super Division with 1-0 win over Lusaka Dynamos .

The visitors were in front as early as 1st minute through ‘Sate Sate’ assisted by Mbombo before the hosts levelled matters in 63rd minute through Gerald Chisha .

However, Kalampa’s deliverance came at 70th minute thanks to forward Mbombo who was set up by Midfielder Harrison Chisha .

Nkana remain 6th on the table despite win with 33 points from 19 matches .

Striker Jesse Were scored the lone goal in 22nd minute to hand the Ndola side their 11th clean sheet of the Season .

Zanaco and Kabwe Warriors are 3rd and 4th respectively on 38 and 35 points while Power Dynamos completes the top five on 34 points .

Nkana’s next match is against Buildcon at Levy Mwanawasa Stadium on Sunday at 15h00 .