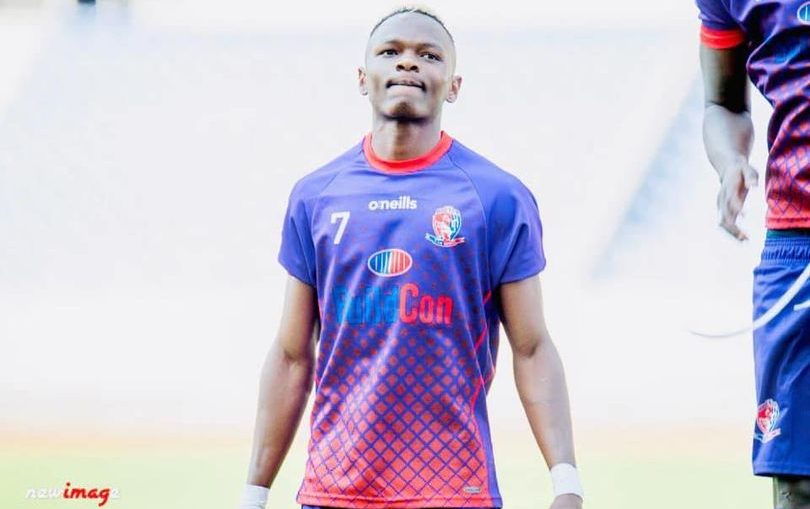 It is strangely sensational to fathom a new young and killer strike on the block and is there to registering a recent rise of Nkana from the near bottom shake of the log .

He needs no trace in consequence of his appearance on the Zambian football battlefield. Bang! There he is themed, only 21 but like a ghost and he is wreaking havoc.

Nkwazi marked their line with caution and awareness trying to pin and play him out of the match sooner than possible but it was like looking for him on Facebook whence he appears on Twitter.

A well-taken strike 17 minutes into the match puts Nkana ahead and it is no other than this boy: Emmanuel Lyonze Mwiinde.

It was not the first time he was scoring in top-flight football though only his second appearance, he made his debut for Nkana against Green Eagles a week past and he didn’t take long to announce himself with a thunder strike on that debut afternoon.

Nkana’s unfailing long hand of favor beckoned him from Young Green Buffaloes in Nkana’s gamble moves to replace prolific Idriss Mbombo and it looks like the Kalampa ‘hand of favour’ made a sure bet.

That hand on top of the heads of Nkana players as they zoom out of the tunnels might not just be an ordinary hand. It’s a hand of favour that caresses the hearts of kings and presidents, a hand that caresses the rocky soul of ZRA – the country’s most stingy and rigid institution and that magical hand now looks like it’s fishing Nkana out of the troubled waters of relegation with such grace and flamboyance.

Nkana has shot to 8th on the log and we might as well be witnessing the birth of a star right in our eyes. Mwiinde is comfortable on the ball and so far doing things we have not seen from a foward since the league started.

He is poised, intelligent and a risk taker which is something that has been difficult to find in a Zambian foward since the hay days of Collins Mbesuma. He is a somewhat untiring figure of Edinson Cavani on the tip of the New face Kalampa attacking spear.

His passing is pin point and shin-twisting and two assists in his first two appearances is a stagger of a testimony of his mental prowess on and off the ball.

Mwiinde is such a storm and stirring Nkana back to their shores of glory but can he be consistent?

Simon Mulenga scored a hattrick on his debut the previous week and he was as quiet as if he was not in the matchday squad against Nkwazi.