Nkana football club couldn’t enjoy the 2015 MTN FAZ Super League. The woes begun with the despatch of the most able and angelic Nkana caretaker “Coach Massy” Masautso Mwale hardly into mid 2014. Beston Chambeshi assumed responsibility after a month or so of Zeddy Saileti pushing thorough in the absence of a head coach. The youngling Zeddy Saileti was praised for his role though short given the commitments of the CAF Champions and the demandable Nkana Football committee, stakeholders  and the holistic fan.

Given to these sensitivity, the coming in of Beston Chambeshi only further created mixed up camps. In historical claims, hardly a decade had passed and Chambeshi was in charge of Nkana when the Zambia Super League giant was embarrassingly pushed to the Division 1 North League. The rising mixed feelings for who should lead at Nkana gave way to the firing of Zeddy Saileti and an undefined “3 wins” ultimatum for Chambeshi for the team that was clearly struggling with goals, performance and a pathetic league position. 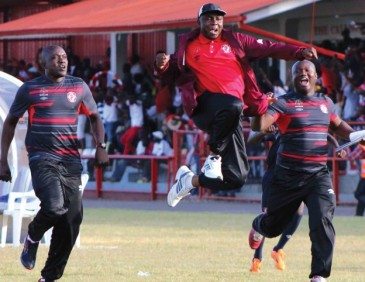 The 2015 league had assumed with Nkana key players loaned, sold, sent off and released. The likes of “Kalubula” Ronald “Sate Sate” Kampamba apparently dubiously whisked out of the country and eventually signed to Egypt. Munthali went back to Power, Festus Mbewe and Francis Simwanza to Red Arrows, Jimmy Ndhlovu extended stay at Power, Masautso Zimba to Konkola,  and Francis Kombe was let go. It was a mountain of cries for the 12 times Champs and only looking at the previous year CAF Champions  challenges, enjoyment and realization with Africa’s bigger teams. 2015 super league was now tough unentertaining to the fans watching players not only average but plunged into disarray and loss of direction for a league position.

Beston Chambeshi under pressure was bulged and replaced with Aggrey Chiyangi formerly from Zanaco football club where he had failed to win a league that was his. By now the Nkana executive realized that it’s not the name of the Team that wins a league and titles. They hurriedly made several changes at the 2015 midseason with new buy-ins with the three Congolese players from Forest Rangers Diego Apenene, Soutra Tshimenga and Walter Bwalya,  that fit in with the International Joseph Musonda returning from South Africa and the existing Simon Bwalya. The team was rearranged pushed through to the 8th position at the league end.

Many dissatisfied looked to the coming 2016 restructured league with upward to 18 teams from 16. This meant the season to be stronger and a bit newer because of those additions. Nkana looked to solidify the team further with announcement of Jacob Ngulube been bought from Damiano, Munthali coming in as free agent from Power Dynamos and the release of the disappointing Kenyan striker Jacob Keli. Jacob Keli coming in was also questionable, in heft salaries and allowances for a player who did not impress the fans, with rumors up that he is disputing Nkana with FIFA over his contract termination. Beston Chambeshi was also wrongfully terminated by Nkana and was seeking damages until he left for Botswana

The recent ruling on Tuesday and Wednesday by FAZ committee about Jacob Ngulube been a Mufulira Wanderers and not Damiano as previously put by the Nkana decision makers largely put Nkana at risk of not putting the house in order. The Munthali been banned for two months and Nkana been fined 10,000 Kwacha has already sent  shockwaves to the fan just about how Nkana handles the transfers.

The social media for Nkana is hyped with with outpourings at Nkana administration, just about highlighting  the recent issues.

“It takes the whole team to win the league”  says the fans, “these issues are indication of how things are done at nkana and maybe that’s why now we have mediocre performance”.

Nkana has undergone several changes with the players and from top administration and at the elm but still the club is plunged into major player transfer dispute just when the league is to start. It appears someone powerful and influential is still pulling strings and riding the team.

End Of The Zesco Reign or Expiration Of Beston Chambeshi.

Perspective: Are fans ever right