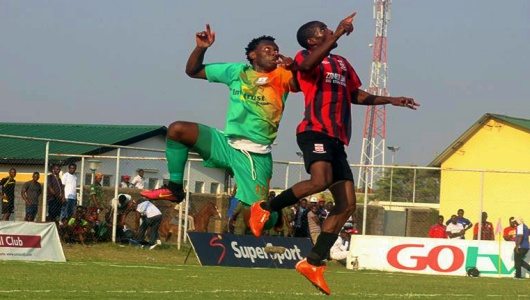 Nkana hits Nakambala with a bang as a response to compensate the 4 – 0 bashing suffered in the prestigious Barclays cup 2016. Just six days earlier in the Barclays semi finals the Wusakili boys suffered at the hands of the clinical sensational Zanaco. The thumping of the sugar boys Nakambala Leopards by 6-3 on Saturday at Nkana Stadium seemed an exact response.

While 400km away at Sunset stadium in Lusaka a bankers block was registered as Munumba’s boys failed to produce insurance to warrant three point collection. Under the watchful Zanaco supporters and fans the event progressed with caution and and tense as neither team failed to make a breakthrough.

The final nil nil result ensures Zanaco maintain the lead and Zesco must win all games at hand to assume a contending place for the top slot.

NKANA TOO GOOD FOR NAKAMBALA.

The hosts were in front as early as 2nd minute through Simon Bwalya. Ronald Kampamba doubled the lead in 23rd minute. Walter Bwalya tripled the score line in 26th minute before missing a penalty.

He added another goal in 55th minute and later on scored a penalty in 85th to register his first hat-trick of the season. Defender Given Sinyangwe scored his first ever goal for Nkana in 70th minute.
Lameck Banda scored for Nakambala in 60th and 82nd minute. Keegan Bwalya was also on the score sheet for Nakambala.

Today’s win of the week 29 fixture over Nakambala has pushed Nkana to 60 points on second position. The hitting of Nakambala however was the most poorly attended by Nkana Football Club supporters.

Next Nkana play Napsa Stars at Nkana Stadium to count for week 31. Napsa in the earlier kick off at Sunset defeated the threatened relegation Lusaka Dynamos.

After a boring first half that showed little hunger for the goal Napsa emerged out of the shell. Goals came through Chitiya Mususu in 76th minute and Alex Mwamba just a minute away from the close of regulation time.

The Curse of Mufulira Blackpool

Elsewhere in the day’s fixture at Musa Kachofa stadium the Blackpool where closed in 5 minutes before the final whistle. Mufulira Blackpool initiated the lead as early as the first half. It seemed the Blackpools where headed for the first victory of the season. But referee Hachiwa pointed to the spot for a penalty in the 85th minute

The Eagles equalized and soon after drama ensued as fans rioted and the game had to be abandoned 3 minutes before the full time.

Meanwhile in Chingola Nchanga Rangers salvaged only a point as they fell to a 1 out of 1 draw with Red Arrows.  Red Arrows slotted in the top six are coming from a 4 – 1 worst defeat at home by Zesco United.

The super league fixture continue with the list below