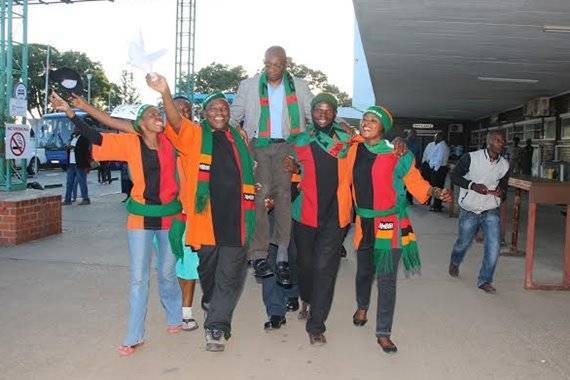 Andrew Kamanga’s ascendancy to the presidency of the Football Association of Zambia in March 2016 was pregnant with much hope,expectations and goodwill from many Zambians, football lovers and followers alike.

But alas that pregnancy has yielded a still born child!

Personally am not disappointed because I didn’t see anything special in him to outdo his predecessor. Simple reason being that AK has no track record of success as a football administrator.

His record in this regard is a litany of failure. It was easy for me to see through his phony message of transparency and accountability. Below is his record thus far;

Intolerance to criticism. Today AK has spread more letters of bans and expulsions than confetti at a wedding.

Unpaid allowances to players in Ethiopia,Zimbabwe,Gabon and South Africa friendly matches. CHAN and COSAFA qualifiers allowances unpaid too. Yet AK pays himself hefty unsanctioned allowances neglecting the most important person in football-the player.

Low morale among secretariat staff due to 3 months unpaid salaries,nepotism,intimidation and corruption.

Unfulfilled promise of foot balls, jerseys and K5,000.00 to FAZ Division 2 and 3 clubs.

FAZ latest financial report show a budget deficit of over K6m with no redemption plan in place.

No renowned kit supplier to all the national teams. The so called KoPa deal is a sham,a fraud and reeks of corruption with no benefit to the FA as it has no endorsement. AK and his cronies are the sole beneficiaries in this KoPagate scandal. Chipolopolo is a big brand to be dressed by a nondescript kit supplier.

The fact that Kamanga and his executive had to pay themselves colossal sums of money as allowances for hosting U20 AFCON and COSAFA before critical persons (players inclusive) and organisations is a testimony of immorality and poor corporate governance.

AK campaigned on the premise of corporate connections and good will. Today the corporate sponsors at FAZ are those that were left by the previous administration of Kalusha Bwalya. In fact we have even lost Zambian Breweries the sponsors of Chipolopolo.

Lukewarm Government support. Signaling a want of confidence in the administration of Andrew Kamanga. Government’s reluctance to fund the salary of an expatriate coach and refusal to fund hosting of 2019 U23 tournament are cases in point.

Kamanga lacks the charisma, oomph and trust to garner public, corporate and Government support and confidence. Requisites needed for one to succeed in football administration. I, therefore, say nothing good can come out of Andrew Kamanga as FAZ President.