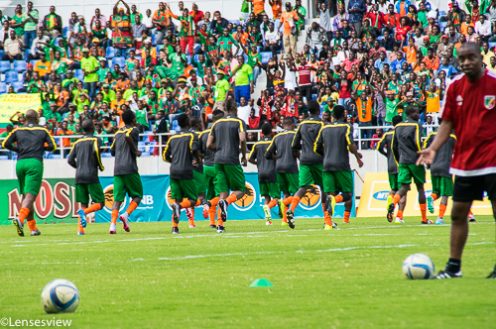 The estimated reading time for this post is 106 seconds

Congo Brazzaville the “Red Devils” held Zambia to a 1:1 draw at Levy Mwanawasa stadium in the group stage AFCON Qualifier 2017. On a 18:00 PM kick off the fully packed stadium saw Lwandamina’s first most ever and agreeable Zambia starting lineup that included Katongo, Mbesuma, Sunzu, Lubambo, Kalengo and the Captain Rainford Kalaba.

On the wheel Chipolopolo  team pushed from the wings causing a sensational play. Rainford Kalaba in the first half had moves toward the opponent area just as on the other side Lubambo Musonda was exceptional pushing in forward with creative-havoc in the statements that should have allowed a 1 goal plus in the first half for the Zambian side.

Few minutes into the second half Winstone Kalengo made a jubilant break through but soon the efforts where thwarted as the Congolese read the Chipolopolo relaxed defence moves and the strikers unconnected efforts after scoring, taking advantage and sharpened the game with their forward wingers who destroyed Zambia’s play.

Full backs are of Nkausu looked tired,  Sunzu wasn’t sharp else he could have leveraged the Congo equalizer goal. Steven Kabamba lacked experience for the depth of the formidable Congo that equally displayed a good side.

Said Lwandamina during the post match press briefing and hoped to take advantage of any chances that his squad will produce facing Congo on Sunday 27th March 2016.