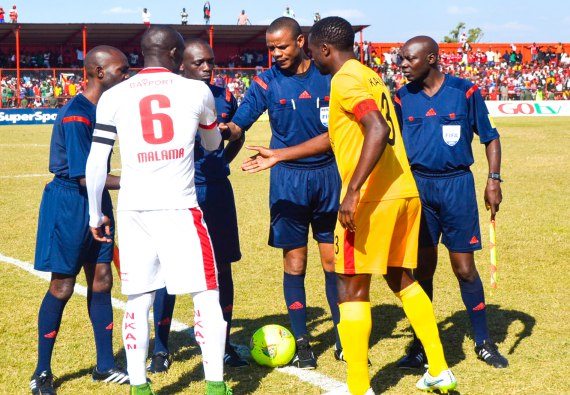 Jani Sikazwe is set to officiate the climax of the 31st edition of Africa Cup of Nations. The final match takes place today between Egypt and Cameroon in Gabon.

The Zambian referee has raised football profile with exceptional and amazing officiating. At the Afcon 2017 finals he is hoped to take charge of the two African succesful nations battle-it to be crowned African champions.

This final event is scheduled for Sunday, 5th February 21:00pm in Gabon, Franceville at Stade de l’Amitie. The match will conclude the enduring long road for the Pharoahs and the Indomitable Lions.

Nations around the world will stream the event live. In UK and Europe its Eurosport  and in the America’s beIN Sports USA. Supersport for the Sub-Saharan Africa.

Jani Sikazwe is a Zambian referee who officiates in the Zambia super league and international matches. He is from Kapiri Mposhi central province. Jani is known for his acuteness, good and sportsman officiating and the neatness to follow the rules of the game.

He has done so in the Zambian league. Also in the international stage where he has continued gaining recognition. In 2013 he was appointed officiate the Brazil 2014 FIFA World Cup qualifier between Burkina Faso and Algeria.

Again in 2015 Zambians football fans were proud to see Jani Sikazwe as Fourth Official for the Afcon finals. He made history by being the 2nd Zambian to handle Africa Cup final.

The first record was registered by late Kabalamuna Chayu who was in charge of 1976 final that Morocco went on to win.

In 2016 Jani’s profile continued to rise on the continent after he successfully handled the final of the 2016 regional Cosafa.

In late 2016 he officiated the FIFA Club World Cup Championship 2016 in Japan between the high ranking Real Madrid and Kashima Antlers. Real Madrid went on to feature Sergio Ramos and Ronaldo with several other Real’s stars.