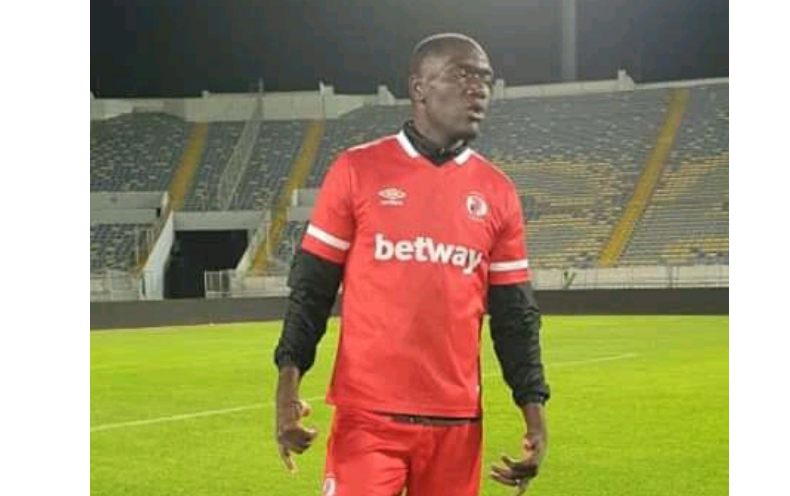 This story about Simon Mulenga is part of the coverage of the remarkable Zambian football players of recent times.

He arrives on the ball before the foot of a defender does and in a nick of time, his shooting instincts twirl him into a wild cat. A sharp turn and kiss of death from his losses onto the bouncy ball and Tas Casablanca was dumped out of the Confed Cup.

Nkana majestically walks into the group stages of the Confederations cup and it’s this boy again who impels Nkana away from the ring of fire.

Simon Mulenga’s ability on the ball is phenomenal. He has such an imposing yet intelligent presence at the same time as he is deadly.

Very few Zambian forwards have ever possessed that cunning ability to steal the ball from the feet of defenders. It is a rare ability once only possessed by world-class greats like Felipe Inzhagi, Tevez, the great Romario, and now categorically Killian Mbappe.

The only Zambian in memory lane was Kelvin Malaza Mutale when his pickpocket feet dazzled the world before the cold hand of death put a wicked full stop to his illustrious young career.

When Simon Mulenga walked down the legendary tunnel at Nkana stadium with the match ball having scored a hattrick on his debut, It looked like nothing to be excited about.

Of course, in the past few years, the country has seen many promising young stars on the rise and then vanish from the limelight like magic. These kids lack inspiration, they lack purpose and hunger for success so they are ever alive at breakfast and dead at dinner.

Who really is Simon Mulenga?

A look at him with a second pair of glasses, however, shows something special and different in the Nkana forward. His holding, movements, sharp turns, take ons, and shooting power brings into short focus the Zambian exploits of the fallen heroes in Nkana legend -Malaza.

Mulenga stepped forward to take on the titanic shoes of Idriss Mbombo and that definitely looked like a bite too big for him to chew but he is refusing to be a square peg in that round hole.

The boy is stepping up in the spirit of Malaza and with him leading the tip of the spear in the Nkana attack, the going to division one narrative is taking a sharp turn to the pursuit of the 14th title.

He has to stay level-headed and focused. So much has been said about him but there can never be a painstaking litmus test for him than the Kitwe derby: Nkana vs Power Dynamoes and it’s on this weekend.

Stinking Blood: Nkana is Out on a Killing Hunt

What buzz will Bazo merit Nkana

The charm behind Nkana’s resurgence

Perspective: Are fans ever right

FLAWLESS WARRIORS FLOORS ZANACO As Nkana Survive by a whisker

How will Lusaka Dynamos line up with Mini Mothusi Cooper

Top 3 performances on ZSL matchday one

Barclays Cup Biddings: Its Rumble or be Rumbled As Zesco Take On Nkana