Skip to content
You are here
Home > International Football > This is Mwepu: Enock disrespects Anfield 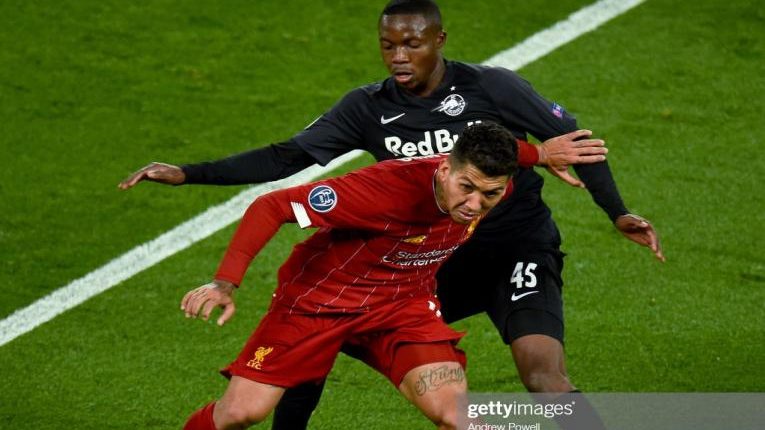 This is Mwepu the Enock who sees Nkoloma in Anfield.

The C made His Champions league debut at Anfield and Enock Mwepu reduced Englands most ferocious midfield to nothing but ordinary. He saw no difference between Anfield and Nkoloma stadium where he once played for NAPSA STARS.

The nimble footed young Zambian literary put up a spectacle of dominating football and he had no match as he claimed the title deeds of the entire midfield.

His feet were oiled with slippery footwork and caused problems for Liverpool throughout the match.

Fearless, he kept moving the ball with such deft intelligencia trickery and mental balance. Over and over, he sliced some audacious chunks of football magic while he neither lost the ball nor misplaced a pass.

He is with no doubt a genius on the ball, his ability to take on his markers and weaving past them even at such a high tensity level with easy was not only orgasmic but mindblowing.

How he dictated play, spread the ball and found the gaps from every angle was absolutely amazing. It was Mwepu vs Liverpool, this is Mwepu: Enock disrespects Anfield

He was such a vast and menacing presence: lanky and snaily, he had no right to keep Liverpool sweating such huge pints of salt but Mwepu was a wonder to behold and Liverpool was lucky to win.

The Zambian under 23 nugget carried the galant Salzburg on his shoulders. Like a cloud of locusts on a fresh field of corn, he single-handedly destroyed the Liverpool attacking power with his tireless runs, command, vision and sublime control.

Mwepu was literally everywhere around, up and down the legendary Anfield; left, right and center, he kept the Liverpool players chasing his shadow.

His fearless control, holding, movements and vision was world class. Salzburg went 3-0 down but once the boy nicknamed ‘computer’ got fully charged, Salzburg stunned Anfield with three fire goals to level matters before Muhammed Salah powered in a winner for the Champions after capitalizing from a technical error in the Salzburg defence.

Salzburg drops third on the table but they are a side capable of winning the group if Marsh can work on his porous defence.