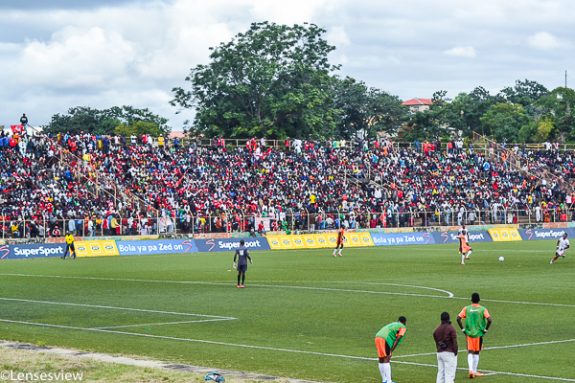 From a born every minute play Mohammad Fathy’s  Kabwe Warriors opened up the flipping wings to give a flying shock to the visitors at Railway “Ucar” Stadium this past Saturday winding to the Wanderers fall.

And thousands of kilometres away from the Zambia super league home the travelling “Team Ya Ziko” Zesco United victory surprised the Malian host in a similar feat for the CAF Champions league first leg fight of  the 1/8th finals.

“Pankalintente” (until the net shakes) had a long trip back to Copperbelt wounding from the 3:1 thrash as the Magnificent Warriors poured goals apart. In a fair game play the visitors where up-to the neck with the host but superb goal after another overwhelmed the Mighty ones walking away only with consolation from the otherwise 3 kick offs as compelled by Kabwe Warriors.

While in the same Week 5 of the MTN FAZ super division the league leaders Nkana was held at Independence stadium by the young Lusaka Tigers “Taba Naka”,  full of good football play with intelligent ball movement but only timid around the box. Austin Muwowo, closer to the half hour mark, broke through the deadlock with a header from a McDuff Chungu chip on the right side and the almost packed stadium roared higher to a Matero undistinguished chant of a “who is Leicester” or “Ati Taba Naka!”

Aggrey Chiyangi seemed to have underrated the Tigers and most fans pointed out his starting lineup as a proof of that and the hesitation to make the substitution likely for Muntahali and Simon Bwalya.

“The blame on the coach, he underrated Tigers, How can he use Jacob Ngulube upfront with Walter. Ngulube is a natural midfielder. When he is scoring doesn’t mean he is a striker. Walter and Simon upfront works well and Ngulube drops to position 8”

Chiyangi must be careful or else?” the Nkana analyst continued.

If Nkana is to win the league the coach must apt his technic with dynamism. As the league progress their will be more strain and mental stress that level out who is a good tactician.

The rest of the results are

Green Eagles continue to demostrate how difficulty it is for the visitors to collect maximum points at Choma grounds as Lumwana Radiants suffered a goal to null.

Nchanga Rangers continue to accumulate points  as Green Buffaloes fail to them on a 1:0 state

A goal from Mwape Mwelwa plus an Idrris Mbombo brace  handed Zesco their second away in the competition aside beating Al Ghazala Wau of South Sudan 1-0  on February 26 in Juba.

Zambia 2 : 3 Zimbabwe – Sunday at Nkoloma, Lusaka as Shepolopolo sees themselves out of the competition