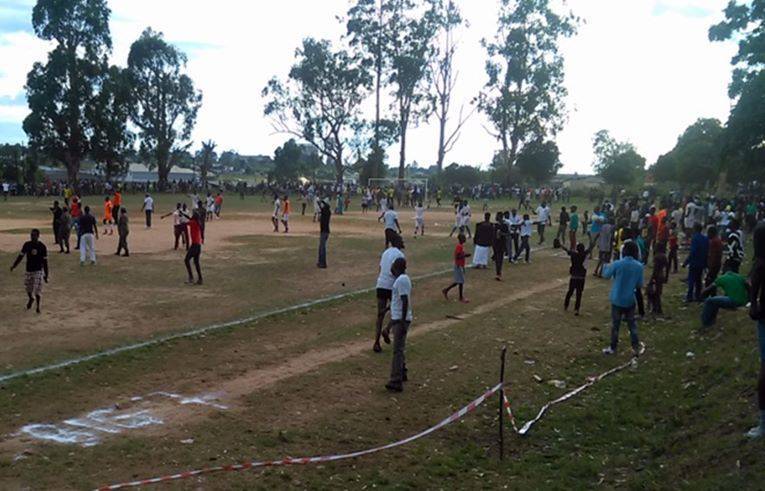 The week 30 deciding fixture involving Chimwemwe Chiefs of Kitwe and Chingola Leopards ended in unexpected circumstances as the game was abandoned in the 94th minute after the Chiefs scored.

Like any other final fixture that holds much of expectations and significantly have an outcome on the league, the two teams battled for top spot to gain promotion to division one next year.

Chingola Leopards came into the game with 60 points, two points above Chimwemwe Chiefs with 58 points. Additionally, the visiting team had to come with four buses of their supporters and cars hoping to defeat the home team and maintain top spot.

As much as the game went beyond 90 minutes the referee professionally signaled and shouted the five added minutes to the crowd.
It was just after four minutes of those added minutes that the home team scored. The goal was a clean one and no controversy could arise as speculated on social media.

The home supporters were thrilled to see their team score at that time and they invaded the pitch in celebrations. During that commotion, the opposing supporters got angry and started to throw missiles on the pitch and the situation got worse until the referee decided to abandon the match with just seconds to full time of the additional time.

The injured players as reported on Facebook did not get injured during the game or celebrations but the uncontrollable Leopard supporters caused all the mess as the team was escorted by the Zambia police officers.

It took the Leopards chairman to intervene and control his team`s supporters but his efforts fail on deaf ears. The football association of Zambia will only decide on the matter once both teams and the referee have sent their reports on the incident.