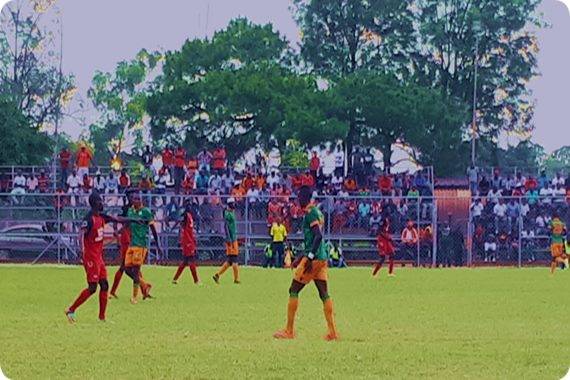 Zambia super league week 8 recap see Zesco United take center stage with a 1 nil victory over sensational Zanaco. An early goal in the 11th minute from the Kenyan defender David Owino was all that dwelt to get 3 points for Zesco United visiting Zanaco.

The win ensured Team Zesco take lead of the super league with 19 points from 6 wins and a draw. Zesco have only lost one game so far. Equally Green Buffaloes have lost only one game so far but have suffered an additional draw in week 8 though have recorded 5 victories effectively placing them at 2nd position with 17 points.

Power Dynamos are in match with Green Buffaloes’ points but their goalless draw in Solwezi in week 8 continued their inferior goal difference against the Army side. Lumwana continues lingering at the bottom feed. The Dynamos goalless draw could not make things better for Zeddy Saileti side.

Another draw was recorded at Godfrey Chitalu stadium. Visiting Buildcon salvaged only a point against the Warriors. This marks a third draw for both Kabwe Warriors and Buildcon after week 8. Though the earlier kick off saw a smashing of the Young Kabwe Youth Soccer Academy. Chris Mugalu brace contributed to the 4-0 smashing of the Kabwe Academy and saw Lusaka Dynamos in the top 5.

Woes for Napsa Stars haunted by Nkana after losing 2-1 at home. The Stars are yet to win a game since the league opened. Two points collected from 8 games played has seeing them at third from the bottom. For Nkana the victory meant they stay in the top 6.

New comers into premier division New Monze Swallows continue to pack as passengers with loses in and out of the week. Visiting National Assembly ensured they collected maximum points with lost of goals. A smashing of 3-0 at home was devastating enough to make sure Swallows stay relegated.

And Patrick Phiri tutored side Nakambla Leopards escaped sharing of points after recording a 1-0 victory. Nchanga Rangers at the final whistle had failed to make a comeback and were sent packing goalless.