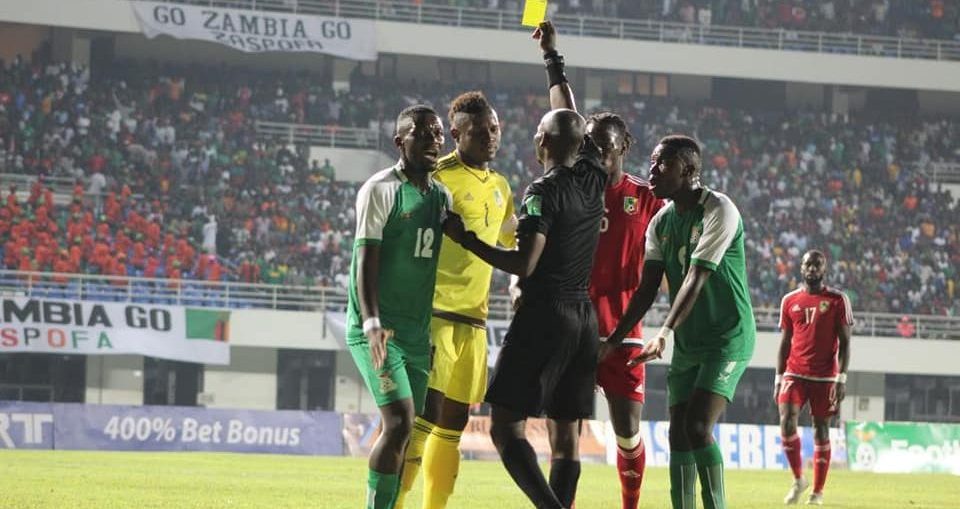 Fashion Sakala came to the fore for a breathtaking winner registering a brace in a narrow 2-1 victory as Zambia edged past Congo Brazzaville.

It was a nail-biting first leg of the Tokyo 2020 Olympics qualifier at National Heroes Stadium stadium in Lusaka between the under 23 Zambia and Congo Brazzaville.

Fashion Sakala remember that name was again the Hero for the Zambian side as he left it late to score a breathtaking winner and register a brace in a narrow 2-1 victory as Zambia edged past Congo Brazzaville.

Here is how the Zambian boys fared.

MANGANI had a quiet day in between the sticks. His judgement and forced interceptions were a Delight and be was unfortunate to concede a minute after the start of the second half. He didn’t see that uppercut coming and he would have done little to stop it.

He was a dictionary definition of hunger and desire throughout the match. His swift runs and poised control in the sweeping role on the rear right flank was inimitable: A loud voice about the depth in the ZANACO squad.

Kebson fumbled with a couple of crosses as desperate times called for desperate measures for Zambia but again all that only trickles down to how much he needed this victory.

The future is Bright but he needs to be reminded that Prosper Chiluya played better than him in that same role a year ago, today he sat on the bench.

I almost thought that axe of a shining chopping tackle broke the leg of that Congolese but no it was a tackle as clean as a whistle. Shemmy keeps reminding me of the legendary Laughter Chilembi. He was highly skilful and once he disposes of his opponent, he kept taking off from his defending position like a twin rocket, peering through the empty pockets of space and only stopped when he curled in a dangerous cross.

Patson Daka was unlucky not to benefit from those telling services.

He was an immovable object and accounted for himself without fuss. Lots of eye brows were raised when Chambeshi named him in the starting line up as he doesn’t play at Nkana but NYONDO still has the pedigree and i would rather he leaves Nkana for a club he would be playing consistently.

His leadership, composure and drive even amidst the raging storm of crowds that were looking patience in his troops kept the team going. This under 23 side might still. E lacking in one area or another but one thing is sure: They have a leader.

Mwepu is class and he must not do what he did today at Anfield because Klopp will buy him. He began the match in the central defensive area and those are schoolboy mistakes a man of Chambeshi’s age must not be making. Mwepu was still magnificent even in that holding role but the best of him exploded when he moved into the central attacking midfield.

Mwepu turned the stubborn Congolese into cons. Chisala’s Pass was hair raising but it was all the magic works of Mwepus bewitching footwork. He glided past a quartet of red shirts before he released the ball to Chisala with touch and deft: Sheer quality!

He had a decent game on the right flank but his final touch of most of his moves lacked bitting power. He is just being introduced into this team and with more game time he is a pivotal part of what lies ahead of them.

No one must wonder why Zambia had more than seven shots on target in the first half and only recorded two in his absence. Banda was impressive in the heart of the Zambian attacking swarm in the first half.

He was aggressive, direct, pinpoint and supported all his passes thereby suffocating the Congolese who were left with little breathing space. His substitution slowed the match giving the Congolese some freedom of expression going forward.

He had a screaming first half and its hard to believe he didn’t score. He was possessed and couldn’t just stop burning gas. The Boy was everywhere and all over the Congolese like a swarm of Armyworms on a field of corn. The power in his run as he swept in an assist for Sakala was unbelievable.

The pressure from the animated crowds was crushing but how Fashion managed to dance around that ball with such confidence even after failing to convert two similar chances earlier shows how much he has grown and mature. He just can’t stop scoring and Zambia hopes he goes to Congo with his scoring boots otherwise the battleground there ready stinks blood.

He was a full tank of quality and the future looks bright. He kept turning and twisting while powering forward with purpose and in every move, he was a zombie who left the Congolese kicking the wind. His dribbling skills and swift change of body trajectory was a pure showdown of the spirit of Kelvin Malaza Mutale.

He was slow and killed the Zambian vibe, pace and bitting power.

If Zambia drew this match Chambeshi would have had a lot of explanations to make on why and how BISTON came in at the expense of a much quicker and aggressive winger in Lameck Banda.

The holding, the poise, vision and the accurate calculation of the weight put behind the ball in that pass was orgasmic.