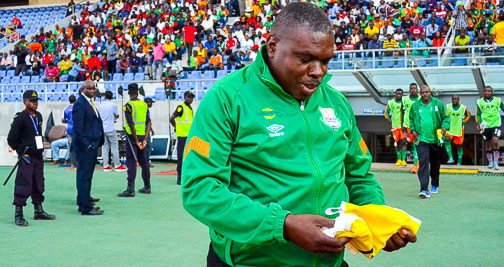 Controversial Zambia and Zesco Head Coach Lwandamina Apologises. Zesco United regrets the recent wrangles between the head coach George Lwandamina and the referees which was unbecoming and unprofessional.

The apology letter refers to the incidence where George Lwandamina was sent off after an altercation with the match officials. This was during the rescheduled event 22 played on 18th August 2016. Of the same event Zesco United went on to win the match 4:0  against Power Dynamos at Levy Mwanawasa in Ndola.

The club also went on further to regret the unfortunate incident that happened on the 24th August. This was between Lwandamina and Times of Zambia reporter Samuel Lukhanda where its alleged there was a sharp argument of words.

Below is the full letter

Zesco United regrets the recent wrangles between the head coach George Lwandamina and the referees which was becoming bad and unprofessional.

Yesterday, 29th August, Club Chief Executive Officer Justin Mumba had a meeting with the technical team who were advised to match their behaviour with the status they have in Zambian Football.
Lwandamina apologized for the actions and has since written a letter of apology to the club.
The club takes full responsibility for the behaviour the technical team and referees must feel free to officiate our matches both home and away from this moment be no interference from the bench.

As a club we wish to also register our displeasure that the letter from the Referees Manager was on social media before it got to us. We believe that our Head Coach is also the national team coach and his letter should have been treated with confidentiality.
The club has since proposed to meet with the referee’s Manager and the Head Coach.

The club further regrets the unfortunate incident that happened on the 24th August between Lwandamina and Times of Zambia reporter Samuel Lukhanda reporter.
Zeaco United pleadges to support the media and ensure a conducive working environment for both parties.