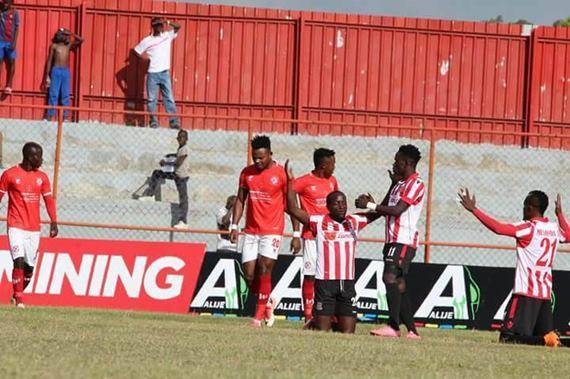 Taonga Bwembya’s 8th minute lone goal was enough for Sensational Zanaco to condemn Nkana to their fourth defeat at home this season. The rescheduled Week 7 match of the MTN-FAZ Super Division was played on Wednesday in Wusakile, Kitwe.

And in Monze, Zesco United needed Maybin Kalengo’s goal to cement their second position on the log. The super league new comers continue to suffer one to another. Maybin’s goal was recorded as early as the third minute.

Bwembya scored 8 minutes after kick off through a brilliantly taken free kick to give the Bankers a 1-0 lead. The Bankers Zanaco move in to 3rd place on 25 points from 12 matches. But Nkana is relegated to 7th position with 20 points after playing 12 matches.

United remain second on the table with 25 points and have one game in hand .

Kalampa have so far lost against big teams Power Dynamos, Zesco United, Green Buffaloes and Zanaco. The Beston Chambeshi tutored outfit have collected 1 point from the possible 9 points in the previous 3 games .

Nkana’s next game is against Kitwe United in Wusakile on Saturday and the game will be live on pay television channel SuperSport.