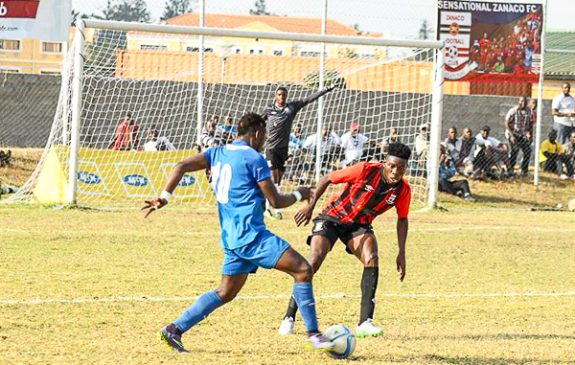 In the Caf Champions league group stage Zesco frustrate Asec Mimosas as Zanaco leads in the Zambia super league.
Zesco United frustrated Asec Mimosas with a 3:1 victory at Levy Mwanawasa in Ndola. Jackson Mwanza opened up the ball across the goal line with John Chingandu before the visitors equalised with a Youssouf Dao.
In the 78th minute Idriss Mbombo demobilised Asec with a hard shot on target. With a small from the defender Asec Goal line man was no match  and Zesco collected the desired 3 points and they remain on the second position of Group A where Wydad is the boss leading and Al Ahly is the bottom feed.
#MTNFAZ Super League Updates
And in the Super League today’s win against Kabwe Warriors ensures Zanaco football club stay 10 clear points ahead.  See table here
Power Dynamos have moved to fourth position and achieve the same number of Points (31) as city rivals Nkana. Fwayo Tembo is credited for the PDFC goals. Green Buffaloes drew 1:1 with the Green Eagles.
Blackpool is still struggling to have the first win in the 2016 season as Lusaka Dynamos took advantage with the 2:1 victory. Conylide Luchanga and Kennedy Musonda contributed for the two goals and Alison Mulelembe for Mufulira Blackpool
Nakambala Leopards lost 1 null at home in Mazabuka to Red Arrows. Arrows win makes the sugar boys move two places up the Nakambala who where one place ahead.
The MTN FAZ super league continues tomorrow with Nchanga vs Lusaka Tigers and and Nkana plays Nkwazi in the first of the second round.